What Is Zero Party Data (and Why Does It Matter)?

Ready for a sustainable way to get better insights about your customers? It’s time to collect zero party data.

This data represents some of the most detailed, personalized information you can get from online shoppers, making it a powerful tool for building relationships with them. And unlike other forms of data, zero party data is future-proof because you collect it cleanly and own it outright. In other words, it won’t be hindered or go away when a company like Google or Meta updates their software or when privacy laws change.

In this article, we’ll get into what zero party data is exactly, why it’s important, and how you can use it to your brand’s advantage.

What Is Zero Party Data, Anyway?

Zero party data is data that a customer deliberately shares with a brand in exchange for a better experience. It can be collected when a customer takes an action like completing a poll or quiz, but doesn’t necessarily require the customer to input any personally identifiable information.

For example, a swimsuit finder quiz might ask shoppers to select options about their preferred swimsuit styles (one-piece or two piece, bikini top or halter top, etc.), colors and prints, body areas they’d like to cover up or accentuate, and water sports they plan to do in their swimsuit.

These zero party data points—shopping preferences, demographic information, lifestyle criteria—can all go into learning more about what that customer is looking for and providing them with the best products.

Clean, accurate data is quickly shifting from a nice-to-have to a must because the world of digital advertising is rapidly changing.

Companies like Apple, for example, have made it more difficult for brands to advertise online by requiring user permission for tracking. And by the end of 2024, Google will stop allowing third-party cookies in Chrome. These changes call for investing in better technology and strategies for obtaining customer data.

But this comes at a time when customers are also demanding more personalization from brands. 66% of customers expect brands to understand and anticipate their needs, and 80% are more likely to do business with a brand that offers personalized experiences.

Obtaining and using zero party data, then, is a win-win for both companies and their customers.

First party data consists of information like behavioral clickstream data or purchase history, which are based on actions that users take on your site but aren’t actively deciding to share with you.

For example, are they buying gluten-free crackers because they themselves are gluten free? Or will they have a guest with celiac disease visiting their home? Knowing the difference may influence what products you show them and how you market to them in the future.

Why Is Zero Party Data So Important?

Since zero party data is voluntarily shared by your customer, it’s extremely valuable and high-quality, especially compared to the other ways that ecommerce companies might try to learn more about their customers.

Zero party data can help you: 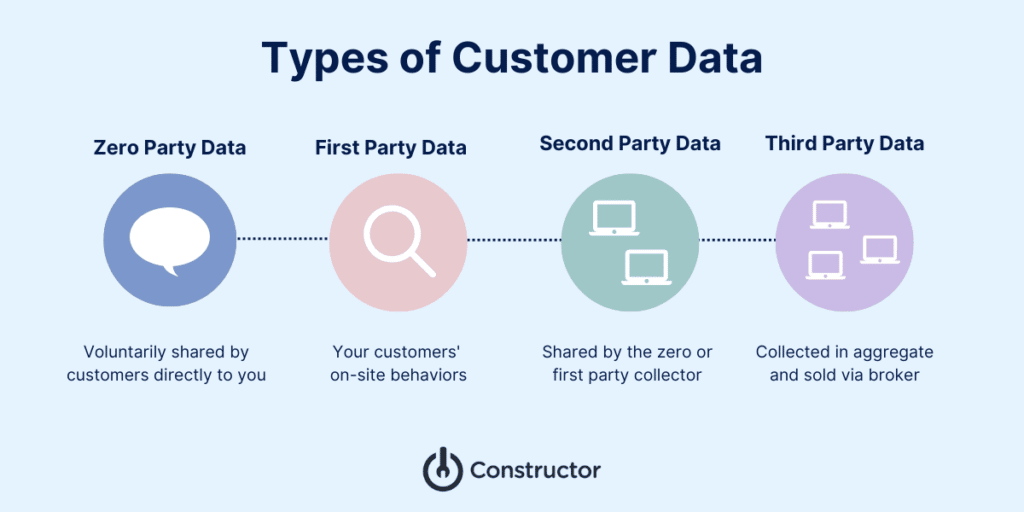 Third party data: Third party data is data that’s purchased from an outside source, often to target on social media channels and in other paid advertising, but the seller is not the original source of the data. Third party data brokers typically aggregate first party data from multiple sources to turn it into a larger data set.

While third-party data might give you more information than other types of data, it’s intrusive and unethical (many consumers are not aware that their data is being sold) and is likely to be inaccurate. There’s also always a chance that your competitors have purchased or looked at the same data, which doesn’t give you much advantage.

Fundamentally, your data collection should be the opposite of your social calendar: the fewer parties, the better. 🎉

How to Use Zero Party Data Effectively

Zero party data, like any other kind, is only worth collecting if it’s used in the right ways. One of the most exciting use cases for zero party data is leveraging it to create micro experiences that build brand loyalty and help shoppers make a purchase. Here are some examples:

The more detailed your data is, the more powerful your retargeting campaigns can be. If you know your customer showed interest in a particular style or brand, you can customize your ads and emails accordingly. This will not only help boost your conversion rates, but show that you have a customer’s interests and favorites at heart, which is a powerful way to increase your brand loyalty.

Interactive website content, like product recommendation quizzes and surveys, are not only a fun way to gamify your site, but a fantastic way to get zero party data. Through interactive content, customers can tell you more about their preferences and what they’re looking for.

For example, if you sell a specialty food like coffee, you can create a product recommendation quiz to help customers find beans that would suit them best. Once they’ve completed your quiz, you can guide them to make a purchase based on their results. 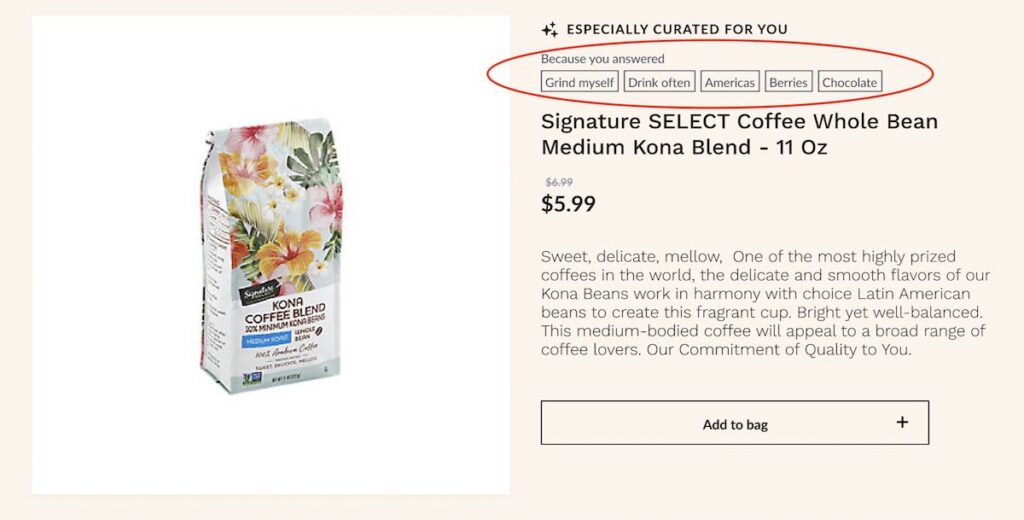 With zero party data, you can run tests that dig deeper into why your audience behaves the way that they do. By segmenting your data by preferences and habits, you can see if there are any correlations or patterns as to what kind of person spends more—and what they’re most likely to convert on. 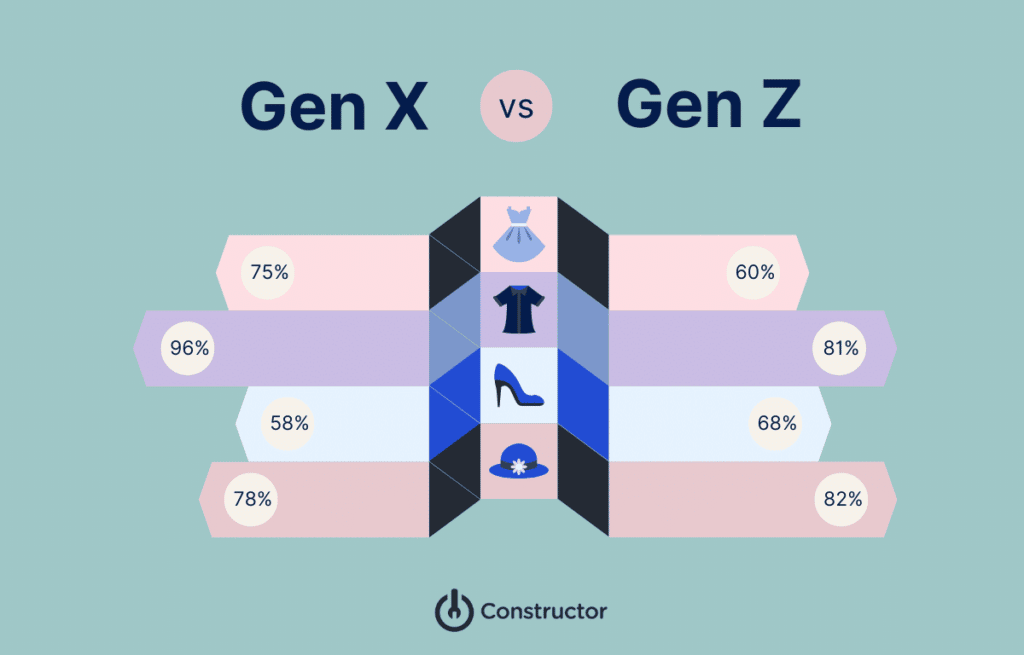 Understanding why some customers churn more than others

Not only will zero party data help you retain customers, it will also help you better understand why some don’t stick. Getting a more detailed look at your customers’ behaviors, preferences, and habits can clue you in on why they’re not sticking around. With these insights, you can then create more effective win-back campaigns to reduce churn.

Armed with individual insights about each customer, you can leverage product discovery tools to make sure that customers see more of what they tell you they like.

Say that a customer who buys gluten-free crackers is actually gluten free. Knowing that information definitively can help you provide more attractive products to them when they type “bread” in the search bar or browse the pasta category page.

Competition for customers can be fierce, but you can have the upper hand if you’ve invested in relationship-building tools. Use zero party data to create more memorable, personalized experiences and campaigns, letting you stand out in the best way possible. Not only is it better for building relationships, it’s also cleaner and more accurate than data you’d buy or rely on an ad platform for.

Looking to start collecting ZPD ASAP? Constructor Quizzes will let you take the guesswork out of finding what your customers really want from you.